EXPECTATIONS: I'm trying not to get my hopes too high here. Yeah, pretty much everything Arnold's been doing since returning to movies has just been perfectly on point, and yeah David Ayer brought us the outrageously good films Training Day and End of Watch. However, we also must consider that we're looking at a screenplay by Skip Woods, a man whose resume includes Hitman, Swordfish, and A Good Day to Die Hard. Although, credit where it's due, he also wrote The A-Team, so he is clearly the master of the "flying tank" subgenre. In any case, I think it's best to go into this one with expectations pretty tempered.

REALITY: Sabotage focuses on DEA Special Forces officer John "Breacher" Wharton (Arnold Schwarzenegger), the leader of a group of roughneck undercover officers fighting the War On Drugs... somehow, usually through sex and/or violence. We open on Breacher's team attempting to steal $10 million from a drug cartel, only to have the money go missing. Six months of suspension and investigation later, Breacher is allowed to put his team back together - only to have them start being killed off one by one in a series of increasingly-grisly murders that no one really seems to be super surprised or upset over. 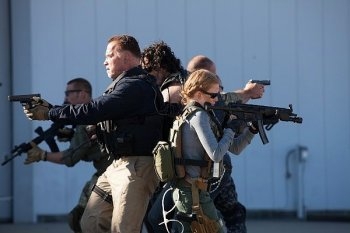 This kind of thing happens a lot in this movie.Ordinarily in that paragraph, I would introduce all of the cast members and characters, but if the movie doesn't care enough to do that, then why should I? There are like seven members of this team, and I can't really remember any of them distinctly except that Sam Worthington wore a ridiculous goatee (which, surprise, didn't make him any better of an actor) and that Mireille Enos, as the only woman on the team, has the defining character feature of "being a dirty whore." I wish I were joking about that one, but Enos' character is constantly called and treated like a literal prostitute for much of the movie, probably because literally all she brings to the team is her ability to snort coke and give BJs to cartel members. This doesn't even make the "Oh, look, she's using her sexuality as a weapon because EMPOWERMENT" argument, because she's constantly degraded for it and is actually a pretty loathsome person.

In fact, all of these characters are varying degrees of disgusting, which makes it pretty hard to be upset or even really care when they start dying. I know that the dark side of cops is kind of Ayer's "thing", but even then, the only way that watching horrible people self-destruct is entertaining or interesting is if they're filled with actors that have charm and charisma, so that we want to watch them anyway. That's the reason you get Denzel, and not Sam Worthington. Instead, Breacher's crew of drunken redneck assholes just comes across as violent, boorish, and on a handful of occasions, actually a little rape-happy. About halfway through the film, I'm watching a white man with cornrows try to sexually intimidate a female police investigator, while his buddy jokes about having PTSD from accidentally meeting a transvestite and I have no idea whose side I'm supposed to be on. Really, I'm just thinking... Fuck all these people. Seriously, fuck 'em.

But this is a Schwarzenegger movie, so we need to talk about the action scenes, right? Well... not really. They're actually pretty few and far between, they're all filmed in a lifeless and boring manner, and Arnold's not really even involved with most of them. When we are treated with an action sequence, the only noteworthy thing about them is that they are unnecessarily violent and graphic. This includes multiple on-screen executions as well as several shots of bystanders being murdered for no reason than to say "Look how intense this is!" Most of the action sequences happen during the team's home infiltrations, which basically consist entirely of "Drug man shoots randomly and wildly. Redneck waits and kills drug man with one shot. Everyone laughs and congratulates each other and jerks each other off because this looks like a damn co-op game and no one thinks that's strange. Repeat." It's tedious to watch and seems to serve no other purpose than to spatter the screen red. 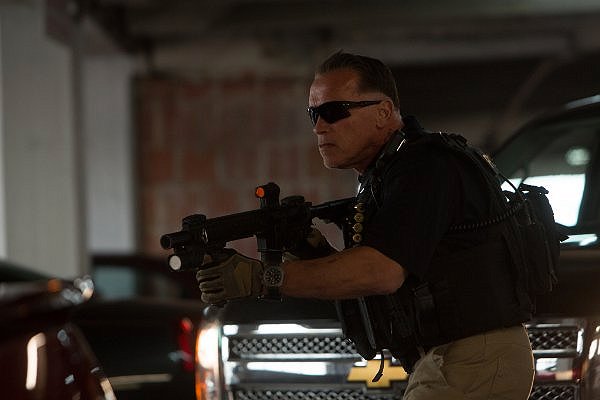 
I'm not a prude when it comes to violence in films, but I do get frustrated when it acts as a cover-up to hide the fact that nothing else even remotely interesting is going on in your movie. Sabotage teeters that line where I would be flat-out offended if I weren't so busy being bored. It attempts to make up for its lack of character development by tossing in twist after twist, none of which make a whole lot of sense upon literally thirty seconds of introspection. And, much like this review, the film has no idea when to end. After what seems like a nice wrap-up and not-shocking-at-all twist ending, we're treated to another ten minutes of pointless and ugly action sequence so that we can solve the subplot no one cares about which was introduced halfway through the film. Great. Fantastic.

Sabotage is a bad, boring film filled with bad, boring people, and there is no moment during its runtime where I felt like the time I spent watching it was time that couldn't have been better spent doing pretty much anything else. With most things that are full of darkness and grit, you hope that there will be something deep underneath worth seeing. But when you're done cleaning the dirtiness away from Sabotage, you find absolutely nothing. The movie was just a giant dirtball all along.

MINORITY REPORT: There's a part of me that wishes Arnold could still get away with blasting fools in the face and then saying "Look at how intense this is!" Then again, I wish every Arnold movie were True Lies. Life is just full of disappointments. - Joseph "Jay Dub" Wade