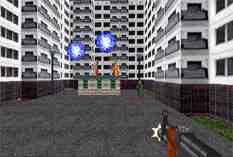 They shootin', Jack! They shootin'!Since the engine this game runs on was manufactured during the Truman administration, controlling your character is about as easy as shoving a convenience store through Kate Moss' vulva. When playing through Raising Dead, be sure to never let any enemies get behind you, because it takes a good half an hour to turn all the way around so you may kill them. Of course, if you're being molested by a barking skull, you'll also have to back up a few hundred yards so you can hit it as well. When enemies get within a certain radius of you, they become impossible to hit... just like real life!

Some of the other weapons in the game include an AK-47 and a magical glowing stick of death that can somehow kill / destroy fires. The AK-47 is a lot more effective than the Civil War Cannon, mainly because you can squeeze off more than three shots before the weekend is over. As you progress, you will be attacked by various other Chinese zombies who are exactly the same as the previous Chinese zombies except their pallete is a bit different and they have new weapons. For example, the green zombies will try to shoot blue balls at you and make rude noises. Once you kill them they turn into a coffee cup. Yes, a coffee cup. Naturally, this cup injures you if you get next to it. I'm as clueless as you are, folks.

Perhaps I'm being too harsh on this game because it's absolutely no fun, makes no sense, and costs $15. Maybe I'm at fault for being too stupid to understand why the dead, which consist of floating skulls and Chinese guys in bathrobes, want to either kill you or turn into coffee cups / evil mushrooms. Perhaps I'm slightly peeved because I have absolutely no idea what the plot of the game is, why the dead have risen in the first place, or what the ultimate goal of it is supposed to be. Or maybe I'm too "uptight" and "sane" to comprehend how a somebody can refer to a "city" as "one texture repeatedly layered on a shitload of boxes." Or "perhaps" "I'm" using "quotes" "way" too "m"u"c"h. To address these concerns, I'm going to ingest various illegal, mind-altering narcotics, and hopefully offer another opinion on this title.