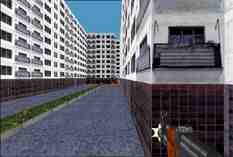 Do you like the scenery? I sure hope so, because you're going to see a LOT of it, chump!As the brief description implies, "the dead have come back and you've got to defeat them." In Raising Dead, the term "dead" means one of three things:

To the best of my knowledge, those are the only things in the entire world which have either died or decided to rise from their graves. Regardless, it begs me to ask the following question: why are the only dead people Chinese? Does Gelios Software have some grudge against the only group of people more infamous for poor translations than their company? Also, I would never forgive myself if I forgot to ask the additional following question (which I almost forgot in my haste to determine the enigma behind the undead Chinese warriors of doom):

WHAT THE HELL IS GOING ON IN THIS DAMN GAME?!?

Let me summarize the main gist of Raising Dead for you, although I'm quite sure you will regret it later.

You spawn on a street, surrounded by identical buildings with one continuously repeated texture and no doors. The streets and sidewalks are littered with gigantic, bulbous red mushrooms that injure you when you step on them. There is no way to kill the mushrooms unless they are positioned next to a wall, in which case you can attack the wall and the mushroom will disappear. In between the minefield of deadly mushrooms are humongous apples which give you 10 health points when you walk over them. I assume there is a city somewhere in Russia where it's commonplace to find healthy magic fruit lying all over the streets and pavement. I also assume that city strictly encourages heroin use. 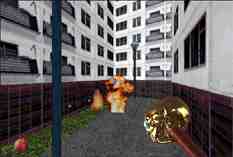 The magic skull stick which can somehow destroy fire. Impressed? I don't blame you.

Every time you take six steps forward, a wave of yammering skulls the size of watermelons will float at you and attempt to make barking sounds. If you are fortunate enough to hack them with your axe, they turn into even more evil mushrooms littering the city streets. You know, because having a patch of death every three inches wasn't really obnoxious enough. If the demon skulls get close enough, they will also start sapping your health away. I am not exactly sure how this happens because the skulls don't really do anything but open and shut their mouth while hovering above the city street. Perhaps they have chlorine gas breath or cyanide-tipped molars. Even better, maybe that's how the people died in the first place! Yeah, that's it! The people were killed by a demented dentist who installed the world's deadliest braces in his victims' mouths, causing them to die the first time they bit into an apple! Then the skulls (deciding their body is too cumbersome to carry around) rose from the dead, saw you munching on apples like a little idiot, and decided to exact revenge on you! It's all coming together now!

Once you slash through about 100 skulls with your trusty axe (which, for some bizarre reason, can only be swung 500 times before "running out"), the game rewards you by introducing a couple evil Chinese guys with elephant guns that never miss. If you are within visual range of the undead Chinese militia, you can pretty much start counting your health down. Luckily there's a civil-war era musket you can grab to mow down the Oriental zombies with, and with a attack time of once every 12 seconds, it sure is a weapon to be reckoned with!

You will then proceed to bask in the genius mapmaking while stepping on doom 'shrooms, getting chewed on by Satanic skulls, and being shot in the face by zombies in bathrobes. The layout of the maps, despite being extremely linear, excel in pure repetition and promote the activity of "turning off the computer and leaving the room." The levels are basically a boxy, turning pathway wedged in between "buildings", which are merely cubes with a window texture layered across them every ten inches. Sometimes there are pseudo-alleyways that lead a good two feet before ending, and chances are pretty good that there's a few dozen Hell Skulls waiting to float at you and begin barking like dogs who have had crank mixed in with their Alpo.