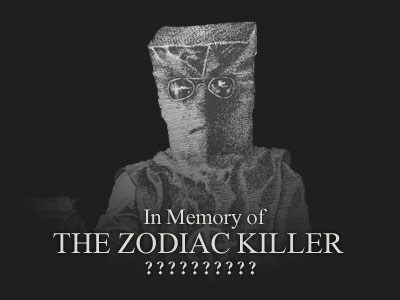 In October of 1986, Vince McMahon arbitrarily decided that the infamous Zodiac Killer must be dead. He offered no evidence, nor did he know the identity of the killer, he simply insisted that the Zodiac had to be dead. This assertion prompted one of the strangest tributes in television history.

On the night of October 3rd, wrestlers wept like infants as they mourned the loss of the Zodiac Killer. McMahon insisted that the Zodiac was merely misunderstood and that someday, "his full genius will be revealed." Hulk Hogan declared that he hoped the Zodiac killer would saw off his daughter's head and Ric Flair claimed, "[The Zodiac Killer] has always been the fifth Horseman." He then gazed up at the ceiling as tears streamed down his cheeks.

A few heels disputed the tribute. Scott "Big Poppa Pump" Steiner claimed if the Zodiac Killer were around he would "show that loopy loser why [Steiner is] called the 'Big Bad Booty Daddy." Kevin Nash and Scott Hall performed a brief skit in which they dressed as teenagers, complete with Scott Hall in a wig. The duo pretended to be making out, only to be gunned down by hooded luchador La Parka.

The most dramatic testimonial of the night came when the lights fell on Hera Arena in Dayton, Ohio. The crowd roared with approval as the familiar ominous theme music began to play. With a blast of magical lightning, the Undertaker emerged from a burning coffin to take the stage. 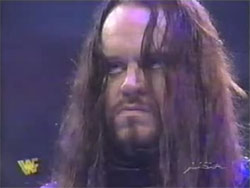 Spirits of the eternal dark beyond called out to me and I have come. Though the eldritch eons I come, journeying upon my Stygian mare Bucephalus I have crept through the shadowed sepulchers of darkest midnight blackness.

The demons and goblins tore at my flesh, but I come. The fire burns my body, but I come. Kurt Angle and Gold Dust conspired to prevent me from entering the stage by locking me in a coffin and burying me in cement, but I come. Vince McMahon attempted to blow up my hearse, but I come.

I am here, Dayton, to celebrate the most noblest and terrible of entities to inhabit this foul plane of dimensional existence. I speak his name. The Zodiac Killer. Killer of Zodiac. One among them all, bound together by the spells of time.

He has hastened many lives to their graves in the ossuaries of a blackened tombstone-encrusted charnel yard. He once flew on black wings, an avenging angel of the night.

Unlock the door with me now, Zodiac. To the other side. Rest in peace...

The Retraction: There was never a retraction for this incident despite massive public outcry. The Undertaker went on to defeat Kane at Brawl at the Beach XV while wearing a Zodiac Killer costume.

Though they are completely ill-advised and based in fantasy or confusion, the tributes offered by professional wrestling promotions are not the worst of the bunch. If you head on over to your favorite Web 2.0 video wunderhaus you can find a whole galaxy of awful tributes to wrestlers. After Benoit's death was announced literally dozens of tribute videos were edited together and posted on Youtube within the first few hours.

Despite his bloody final acts, Benoit has joined the ranks of the Owen Harts and the Brian Pillmans of the world. Thanks to overzealous and overly forgiving fans, he may one day have as many tribute videos as Stone Cold Steve Austin. At least until Austin dies, at which point I'm pretty sure the Internet will collapse under the beery weight of middle-finger slingin' rockabilly video clips.