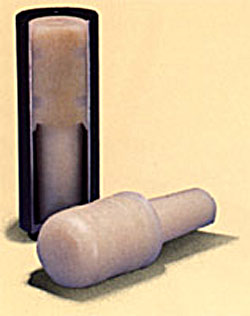 Boundless pleasure awaits on the receiving end of an errant baton round! Many police officials also have access to various types of nonlethal ammunition. An example of this type of ammunition is the baton round. This round, often referred to as a "beanbag round," fits inside a 12-gauge shotgun shell. It sounds like a relaxing way to be subdued in the rumpus room, but it isn't. When fired, the baton expands from the barrel of the gun and provides a large surface area on impact to limit the possibility of a penetrating injury. It is designed to cause sufficient pain to incapacitate or deter the target.

The only problem with these and other types of nonlethal ammunition is that they are often deployed in crowd control situations. As you might expect, firing rounds made out of anything from a shotgun can cause serious harm or even kill someone. As an example, baton rounds have a greater than 2% fatality rate according to a Department of Justice survey. Rubber and pellet rounds are less likely to be fatal, but more likely to cause serious injury.

There have been media reports of unarmed bystanders being shot and killed with virtually all types of nonlethal ammunition. They were caught in the crossfire of a situation where police would never think of deploying lethal ammunition. One lesson is obviously that you shouldn't stand around to watch a riot, but maybe another lesson is police shouldn't be shooting shotguns at rioters. 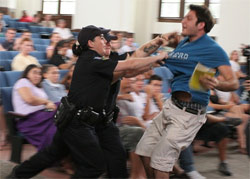 Even asking politely won't save you from a healthy dose of the zap-zap. One of the most prevalent nonlethal weapons of the 21st century is the Taser. You have probably seen many video clips of law enforcement officers and soldiers taseing one another and laughing about it. You may have also seen various video clips of civilians being tasered in the field and not laughing nearly as much about it. In fact, they tend to scream about it a lot and possibly cry.

The Taser fires one or more barbed darts that stick into flesh. Conductive wires trail from the darts to the weapon and allow the person using the Taser to administer an electrical shock at the pull of the trigger. These shocks cause incapacitating muscle spasms and extreme pain. The batteries in the Taser contain enough charge to administer a shock that lasts multiple minutes, although the weapon is generally used for only a few seconds at a time.

Watching people being "tasered" or "tased" on video is a great pleasure. I realized this after watching a video in which a woman was pulled over while driving and refused to stop talking on her cell phone or really comply with the officer's instructions. The woman was behaving like a complete bitch and it was cathartic to hear the "pop-zap-zap-zap!" of the Taser firing and her wailing in agony and flopping around on the ground.

It was only much later that I reflected that the woman in the video was pulled over for having a taillight out and was tased for refusing to comply with the officer's instructions. That seems like an awfully shitty reason to be shot and electrocuted. In that situation the Taser did not take the place of a firearm, nor did it fill in for a baton strike. The cop in the video did not seem angry and I doubt he was breaking the rules by shooting the woman with his Taser.

There are so many of these videos of the police deploying Tasers that ending a sentence with "or you will be tased!" has practically become a catchphrase.

The resulting videos are hilarious, but I have to wonder if a new form of dialogue isn't being invented because of the easy and almost carefree way police will use their Tasers. They have even been renamed from "nonlethal weapons" to "compliance weapons," indicating that they no longer take the place of an officer's firearm and they are now used as a means of enforcing obedience. The subjects in the videos are almost always petty criminals, guilty of crimes so insignificant that in many cases they could not have been taken to jail prior to their tasering.

Police forces that issue Tasers to their officers invariably see a steady climb in the number of Tasering incidents the longer the weapons are in service. This rise in the usage of the Taser is not matched by a statistically significant reduction in the use of firearms by police departments. It's fair to keep in mind that Tasers, just as all of the weapons covered, are not guaranteed nonlethal. 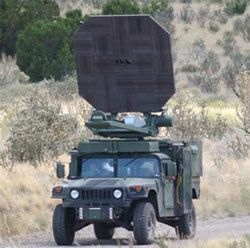 I brought your flooring sample! The future holds a number of advance nonlethal technologies that will make it easier for officers to subdue suspected criminals. One such device, manufactured by Raytheon, is the Silent Guardian. This vehicle-borne device uses nonlethal radiation that stimulates human nerve endings and causing intense pain. Referred to as an "Active Denial System," Silent Guardian is designed to keep crowds and riots at bay without harming innocent people.

You can watch the Omni Consumer Products promotional video on YouTube.

There are many nonlethal directed energy weapons in development. Some are designed to cause uncontrollable bowel movements, others just embarrass people away.

I'm sure those will make for some really hilarious videos in the future, but is this the path we want law enforcement to take? Has the prevalence of Tasers been a net benefit to society?

Call me an old fogy, but I sort of miss the good old days when the worst an unarmed guy like me had to worry about was getting a crack on the leg with a wooden stick.